August  17, 2015. 12th ranked Lawrenceburg made the journey to the Graveyard to face off against 6th ranked Oldenburg Academy for the first game of the year.

What a way to get the season under way, two very good teams playing to a 1-1 draw. The Graveyard was rocking with a full house on hand plus ETC was there to broadcast the game live. Both teams lived up to their billing as neither team gave in.  As It was a defensive struggle to say the least.

OA scored the only goal from an assist from the Keeper Adam Mullen. Adam a sophomore starting his first varsity game between the sticks had a busy night and came up big.  Adam made a save late in the game when LHS was all over him.  Our defense did a good job of not letting anything in the net.  However, LHS scored their only goal off a PK late in the game as we were called  for a foul just inside the box

Offensively we had our chances, on the only corner kick we had for the game Aaron Huber hit Stuart Lamping on the head and Stu sent a rocket towards the goal.  Unfortunately, for us the keeper was standing  right where Stu directed it.

Lawrenceburg scored on a PK in period 2 at the 24:05 mark.  They had 18 shots with 6 on goal, 2 off sides, 8 fouls and 8 corners.  Their keeper had 6 saves.  A physical game to say the least.  Many good things to build and improve on as the season is now under way. 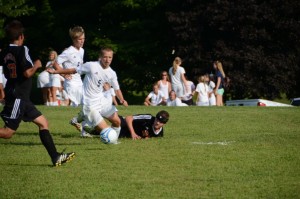