Oldenburg Academy Girls soccer team wins class A sectionals for the first time in school history!  Twister got the win in grand style as well.  Through a random draw OA got a poor draw for this year’s tourney, having to play three games in a week to advance.   Every team understands that this may be the last game of season so they give it their all for 80 minutes each game, making the climb steep.  Our team played Knightstown on Tuesday with an 8-0 victory followed by 5-0 win over Triton Central on Thursday leading us to the final game on Saturday with opposite bracket winner, home team Centerville.  The OA team warmed up as the sun was setting and the lights came on and the temperature started to drop.  Referees called the captains, Seniors Erica Geers, Maria Lewis, Juniors Margaret Glaser and Haleigh Reed.  The coin flip decided field direction of play and the kick off team.  Nobody cared because the winds were light and the sun was below the horizon, so glare was not a factor.  Nerves were starting to kick in as the starters were told to take the field for team introductions and in a sign of solidarity, each team member wore a single braided pony tail.  All the years of play, practices, sweat, painful injuries, parents support, coaches needed to be celebrated by earning a sectional win that night.  No second chances… its game time.  The whistle blowed, the clock started and the Twister Machine started to wind up quickly and confidently.  Centerville got to watch OA all week so it was no surprise that they wanted to interrupt our long game by double/triple teaming #6.  What they did not realize is that #6 Haleigh Reed doesn’t start the play, she just finishes it.  It all started in the middle with Maria Lewis, Ava Geers, Elizabeth Schulte, Cori (Hammer) Hammoor, Stella Hillenbrand, Clare Weidner and Andrea Rink or it went to wings Jill Eckstein, Lexi Brown, Lizzie Kelnhofer or Bella Sterchi before it made it up top.  Yes we play everybody!  We have 18 athletes and they will win or lose this game as a team.  In the 12th minute Ava Geers delivered a controlled pass to the 25 for Haleigh Reed who accelerated away from the Centerville defense for her first of many challenges with the last girl between her and the net.  Unleashed, Reed proceeded to take passes from Lizzie Kelnhofer, Anya Smith and Elizabeth Schulte and turn them into a series of challenging and mesmerizing finishes. Next, Lexi Brown driving the outside lane and slipping an unstoppable ball just under the top post. Freshman Sydney Hogg finished off the night like a storm with two late game goals 4 minutes apart from 2 assists by Maria Lewis. Sydney’s high school career got off to a great start this year.  The OA boys soccer team was in the stands rewarding the girls with a series of cheers that were perfectly timed with every good touch.  Respect.  Not to be outdone by the offense the Twister defense of Anya Smith, Erica Geers, Margaret Glaser and Madie Hogg repelled press after press, getting knocked down, pushed around and barely getting a breath.  The coordination and stamina made the Centerville offense uncomfortable as they could not get enough time on their half of the field to mount a solid attack on goal.    Outstanding goalkeeper Regan Weberding almost got the night off with all that great defense but stepped up when it was time to do her job and earned her 3rd shutout of the state tournament series.  3 for 3.  No goals. Nada.  The Oldenburg Academy Girls Soccer Team won 7-0 and gets its first ever Sectional Title.
Haleigh Reed finishes the sectional tournament with 12 goals and is ranked #1 in Indiana class A with 40 goals.
Maria Lewis is currently 5th in Assists with 18 in class A.
Regan Weberding at 7th in Goals Average Against at 1.05 in class A.
Jillian Eckstein 17th in assists in class A. 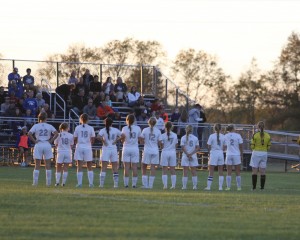 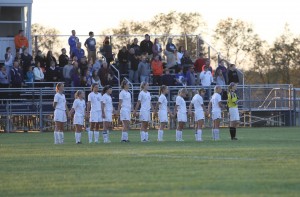